Your arm was injured when you fell. It can be painful to reach behind your back or lift your arm over your head. It is possible to make an appointment with a doctor right away. You will see improvement over time, and if not, your doctor will examine it. It’s not an urgent problem unless you work in manual labor.

The same applies to automobiles. Although it can be annoying, a loose muffler will not cause any major damage to your vehicle. Your car’s air conditioner is not supposed to blow hot air. While it might feel uncomfortable to delay maintenance, it will not stop the vehicle from operating. You can drive for several months without an air conditioner, and the vehicle (unlike passengers) will not be worse off.

There are also those problems that can’t be ignored. A gas leak, an oil leak, or a radiator leak can all indicate serious problems and should be addressed immediately. Driving a car that has oily smoke or leaky exhaust can be very dangerous. These are the most common repairs that should be made to your car right away. 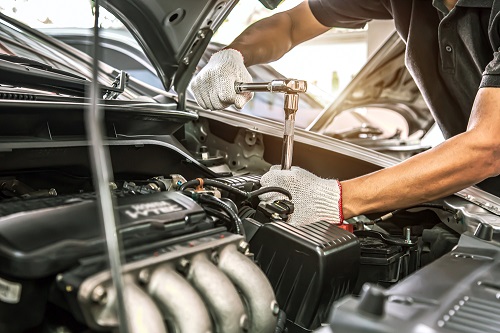 Leakage of oil can be for many reasons, and they all could lead to engine damage. Oil leaking from a vehicle should be fixed immediately. Most oil leaks can be fixed quickly, such as a loose oil filter, cracked seal, or gasket along the oil line. This includes the crankshaft cover, oil pan, timing chain cover, and crankshaft cover.

A few hundred dollars can be spent at a auto repair shop to replace a leaking gasket or seal. This may also be necessary if the seal has been severely damaged. Gaskets and seals can often leak due to the normal heating and cooling cycles, underuse, and other factors that can cause them to crack or dry out.

A blown head gasket can cause a variety of symptoms including oily coolant, white smoke coming from the exhaust, loss of coolant and engine performance deterioration, as well as oil loss.

The head gasket seals the combustion chamber to the engine block. It keeps oil and coolant out of the fuel and spark plugs. If the head gasket is damaged, oil can get into the spark plugs and contaminate the coolant. Coolant can also contaminate oil and cause engine damage. If left untreated, a blown head gasket could cause a seized engine.

A complicated operation, which involves the disassembly and reassembling of large parts of the engine, can be done to replace a blown head gasket. We will give you an estimate of the cost and take about a day to complete. It is the best way to prolong your vehicle’s life.

The Engine is Knocking or Rattling

Because the cause of a knocking or rattling sound is usually expensive and urgent, it’s often called “the death knock”. The engine may not be receiving oil. A knocking sound can often indicate this. An emergency auto repair is required for the source of the knocking sound, which could be caused by an oil pump, oil line, or another component. Without lubrication between the hot metal parts of the engine, it will not last long.

Rattling can be caused by a number of problems, such as worn piston rings, timing chains, or engine valves. These issues are costly and require immediate attention. Wearing piston rings can lead to poor acceleration, rough idling, and eventually a costly engine rebuild.

A malfunctioning air conditioner system is not crucial to vehicle operation. However, a malfunctioning cooling unit is. This is the difference between cooling passengers in the car and cooling its engine. The cooling system maintains the temperature within a limited operating range to maximize efficiency. If the cooling system fails, the engine temperature can rapidly rise to dangerous levels and cause damage to the head gasket, engine block, and cylinder head.

Maintaining proper coolant levels is the best defense against overheating engines. Also, pay close attention to the temperature gauge displayed on the dashboard. Overheating can almost always be avoided by preventative maintenance.

However, there are some cooling problems that can occur suddenly and without warning. A failed water pump, damage to the radiator, or a leaky heater core can cause rapid temperature spikes. The coolant that has escaped from the engine may not be able to regulate it. These are all situations that require immediate attention and should be taken to a service station or tow truck. If you are looking for an excuse to buy a new car, it is not a good idea to drive with an engine that is overheating.

An engine can fail if it receives too much fuel on its cylinders. Insufficient fuel can cause cylinders to heat up, causing them to burn out gaskets, spark plugs, and rings. If this happens, it can also cause damage to the pistons. All of these are fatal for the vehicle’s continued operation.

Excessive fuel consumption will cause the vehicle’s fuel efficiency to drop as the unburned gasoline is expelled out the tailpipe. Although it’s not as urgent as not having enough fuel, it can indicate that a crucial part isn’t working.

There are many reasons why a cylinder is running “lean” or “rich”, but fuel injectors are frequently involved. The fuel injectors control the timing and amount of fuel entering the cylinders. When they fail, these problems can be severe. To avoid damage to the cylinder or its components, any vehicle that starts pinging or misfiring must be taken to a professional mechanic immediately. While not all automotive problems are urgent, the ones listed below deserve immediate attention. Even if the bill is high, it can still be a bargain when compared to replacing an engine.

Did your car break down all of a sudden? Miller Brothers has you covered. We offer emergency auto repair, auto body repair, and more. Come visit us today or contact (865) 689-5072.

LET’S GET IN TOUCH